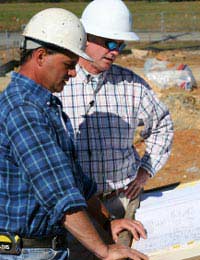 This extension option, knocking two houses into one, is one that’s very close to my heart, as I live in a house that was created that way. Not with any level of finesse, mind you.

The wrong way to do it

The house is about three hundred years old at the front, a terraced house of thee stories hard on the road in a Cotswolds town. At some point after that, probably about two hundred years ago, a barn or workshop was built at the back, at right angles to the existing house. This now has two rooms upstairs and two down.

One day someone decided to join the two together, so they did, by knocking a doorway through, between the two properties, at ground level. That’s it.

That’s right. Two boilers, two heating systems, two electrical circuits, two staircases. It is nice having two bathrooms, although if you run out of toilet roll in one and have to nab some from the other, you have to go downstairs, through the kitchen, dining room and lounge, upstairs, grab it, then go all the way back again, which can be frustrating.

So how should it be done? By coincidence the house I grew up in was also two houses knocked into one, but that was a very different job. It had been two late Victorian three-bed semis, each with their ‘front’ doors in the end walls, and staircases meeting in the middle.

But when we moved into it it wasn’t immediately apparent that is had been two houses, so well had the extension been done. The most expensive part of the job was almost certainly taking out both staircases and making one, wide sweeping one in the middle of the house.

This helped to make the extension look like it had always mean to be that way. One front door was kept and the other was replaced with a window. Then the two reception rooms at that end were combined into one, losing the hallway in-between as well, so there was now one long, large reception room with that south-facing arched window where the front door had been. Very nice job.

In fact the only slightly incongruous aspect of the extension, or perhaps conversion is a better word, was that in this room, and another one created from two rooms, one fireplace had been removed and one left.

This inevitably meant that the remaining fireplaces looked wrong, being at one end of a long room. Still, moving chimneys is an incredibly difficult job and it can be understood why they didn’t go that far.

Which extension option is right for you?

So if you can buy the house next door, which of these two polar opposites should you go for? It’s obviously cheaper to do the ‘one hole’ option, but very inconvenient. On the other hand, the economics of house buying in the UK mean that two small houses will always sell for more than one larger one.

So perhaps the middle ground is best, doing enough work to make the extended property work well, but making it relatively simple to undo it all at a later date. It’s almost the perfect option for families. You have all the extra space while the children are growing up, then when they’ve left home, you can separate the houses again and sell off or rent one half while you downsize into the other.

What should you look for?

Identifying supporting walls is key. With the second house discussed above the wall between the two properties presumably wasn’t a supporting wall, as it had been removed some sixty years before we moved in and the house is still standing today.

With a similar layout (i.e. staircases meeting in the middle) and a supporting wall, making one large one would be horribly expensive because of the structural alterations required. The solution here is to remove one staircase and knock through to next door on every floor. The staircase that remains should be the one that is closest to the front door that will be retained.

You can then change the internal walls to bring the space where the staircase was into the new rooms, making those on that side larger. This might give you enough space to put en-suite bathrooms in, something that would help raise the value of the combined house if you were intent on keeping it that way.

Plan well and take the chance

It’s well worth employing an architect, who is likely to come up with ideas that you would not have thought of, or point out pitfalls in your plans. You should definitely employ a structural engineer too, if you are going to be knocking down walls.

An architect will also be able to advise as to which changes are easily reversible, if you think you’ll want to revert to two houses in the future. But if you get the opportunity to do an extension like this you should take it with both hands. Even if it goes very badly, all you have to do is reverse the changes and put it back on the market.

Moving the Kitchen to the Front of the House