Moving the Kitchen to the Front of the House 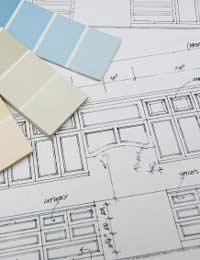 One of the most popular extension options is to take some of the garden space at the back of a house and create a new family space. It's usually a combination of a kitchen, dining space and living space, sometimes an open plan layout across the whole rear of the house with a sun lounge or conservatory.

Look at the Way Your Family Uses the House

While that is almost certainly a great idea and it gives a superb space at the rear, is putting the kitchen in the new extension necessarily the right option? Take a look at how you use your house and where the family is at certain times of the day.

If you are planning an extension at the rear of the house it's worth looking at an option that’s gaining popularity, particularly with homes that have tiny or non-existent gardens. It is putting the kitchen at the front of the house and using the extension at the rear for living space. Many homes were built close to the street in the Victorian era and during the suburban explosions in Edwardian times and between the wars.

After World War II, when town planning really came into the ascendancy, private homes were built in estates, with cul-de-sacs and curves. As well as giving a more private feel this slowed down traffic so that traffic noise isn't such an issue. If you don't believe this and you think your close is loud, try standing in an urban rat-run street with a 30mph limit.

When these houses were built it made sense to have the public rooms to the front, near the front door, and the kitchen and other unmentionables at the rear. As we live more relaxed lives this is less important.

But if you have a living room at the front of the house then you are always having to turn the television or radio up to hear it properly. One family living in our street praises the fact that they can now pause their TV when a loud car goes past, or rewind it to repeat something they missed.

If you put the kitchen, which is often only used for a few hours a day, in the front room it becomes the area that is subjected to the worst of the street noise. And of course cooking is a noisy business anyway, so you don't notice the traffic noise so much.

Planning Relaxation at the Back

Now the open plan extension at the back is free to be used completely as luxurious relaxation and family space. It's quieter at the back of most houses so it all seems to make good sense. And you'll be able to close the door on cooking smells and washing machine noises, which you can't in an open plan layout.

But what are the practicalities? Well, it is going to be more expensive than doing all the work at the rear of the house, there's no denying that. But the difference won't be that great. Your extension project would have included a new kitchen anyway and the extension build costs won't be much greater. In fact you'll save money on the fitting out of the rear extension because it won't have a kitchen in it.

Utilities Are the Bugbear

The only extra expense will be in bringing the utilities, water, waste and perhaps gas, to the front of the house. But modern techniques make that easier. Plastic plumbing for hot and cold water supplies is very flexible so it can be pushed through floor voids and around corners in ways that copper pipe never can be. Most houses have water coming in from the street, even if the stopcock is in the kitchen at the back, you just need to find it.

Waste is more problematic as the pipe bore is larger and in a modern kitchen you may now have to cater for a washing machine, dishwasher and tumble dryer as well as the waste from the kitchen sink. But many semi-detached houses will have drains and other utilities at the side of the house, so there's not so far to go to reach them. Gas pipe needs to be metal, so that could mean lifting floor boards or making channels in concrete floors.

Still, the main point is just to consider it as an option before you get started. Look at where your utility supplies are and this may not be so difficult. Many families would benefit more from rearranging the space in this way and the costs aren’t likely to be very different.