Home > Building Work > The Walls of Your Home Extension

The Walls of Your Home Extension 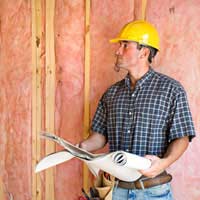 Assuming you're building an extension that's got solid walls, rather than a conservatory, you'll need to consider how the walls should be built. In fact, many conservatories have a wall forming the lowest foot or two, known as a dwarf wall, with the glass starting at the top of it, so some wall building may be necessary with a conservatory too.

Having put in the foundations the wall building continues up, taking in the damp-proof course (DPC) or damp-proof membrane. This is a layer of thin material that's impermeable and acts as a barrier to water creeping up the walls.

DPC's used to be made of slate or a course of special impermeable bricks, but these days they are almost always a bitumen-polymer or polyethylene membrane. This layer is placed across the bricks of the two layers of the wall, including the cavity between them, about two brickwork courses up from ground level (depending on the size of the brick, stone, or block being used). Without a DPC water from the ground would be drawn up through the interior of the bricks themselves, using the capillary effect of the pores in the building materials. This would cause damp problems in the extension.

It's important, with an extension, that the new DPC is integrated with the existing one in the house where the new walls join the old walls of the home. And speaking of joining the walls, if an existing wall is to be added to in order to create one wall of the extension, try to avoid butt joints.

This is where the ends of the bricks of the new wall line up vertically against the bricks of the old wall so that the join between old and new is blindingly obvious. To make an extension work and, critically, to get the highest house price increase from the investment of the extension, the objective should be to make the house look as much as possible as though it had been built that way in the first place.

Very obvious dividing lines, although impossible in some instances, will plant the impression in buyers' minds that the work was done on the cheap. Taking the time and trouble to chop out the half-bricks required to dovetail the new wall with the old will be well worthwhile in the end.

In a modern extension the internal wall will almost certainly be block work, unless there is a restriction on the type of materials allowed, if the house is listed, perhaps. Blockwork is a lot cheaper than brick or stone and it makes sense to use it where it won't be seen. The outer layer is where the materials will matter more.

If the rest of the house has a sprayed or painted finish such as render or pebble-dash, then block can be used for the outer wall as well, since it will then be covered up. But with brick or stone, matching the original material is the best option, if possible. It may not be possible though, perhaps matching materials are no longer available, or the house has aged so much that even an exact match would take fifty years or more to blend with the existing property, then you could consider block work covered with wood panelling or some other weatherproof finish.