Home > Building Work > Laying the Groundworks & Foundations For an Extension

Laying the Groundworks & Foundations For an Extension 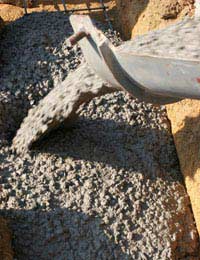 Unless you're erecting an extension that's little more than a lean-to, then solid foundations will be required, with groundworks to prepare for laying those foundations.

Depending on the layout of your plot and the extension, groundworks can be quite a big part of the build. A sloping site or hard ground just under the topsoil can make it more difficult too. Clearing the ground of any shrubs, plants and turf is the first job, making sure to take care if you are hoping to re-plant some of the plants later on. In fact, if that's your intention, it's probably better if you clear the plants you want to keep before your let the contractors in.

Builders will usually use labourers to do the groundwork digging as it’s cheaper than using skilled labour to do the work. If it's a single story extension or a conservatory with a dwarf wall, then the area of the extension, plus about a metre around it, will be cleared and dug down to a level sufficient to allow the floor and supporting layer to be put down.

The pit for the foundations will be dug around the edge of this area. The depth will vary depending on the height of the extension and the material being used. If the terrain is really tricky, perhaps soft clay or rock, then specialist foundation methods such as piling or anchoring will be used, but for normal applications it's just a case of laying down the right number of courses of block or brick to support the height of the extension and to bring the foundations up to ground level.

Again the materials used for the foundation layers will differ. For a very large extension the builders might simply fill the pits almost to the top with concrete, as is often done for a new house. These are known as trench fill foundations, and the walls are started on the top of the concrete, with block and brick (see below).

But for a simpler extension it's often not worth the trouble of getting a large cement load in, so 'deep strip' foundations are used. This is where; apart from a small layer of cement at the bottom of the trench, the whole underground part of the foundation is built up with blocks. Then there's a switch to brick or stone, depending on the area and style, once the layers begin to reach ground level. Trenchfill is more expensive than deep strip but is faster.

Whichever method is being used, you'll arrive at ground level at one point or another and make the switch to the more decorative layer. This will usually only be applied on the outside of the two walls. The foundations are normally made from two walls so that there is an insulating cavity between the two, and this cavity will be carried on up into the walls of the extension itself.

If there is to be a decorative layer of stone or brick, as mentioned above, then it is usually only applied to the outside layer. It makes sense to use ugly but cheaper building blocks such as breeze blocks on the inside layer as they will never be seen.

On to the Walls

In the constructions trade, once the foundations have reached the height of the damp-proof membrane (DPC) then that is considered the end of the foundations and the beginning of the wall building.