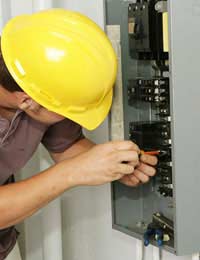 If you are planning a detached extension in a garden that you intend to use all year round then it's likely that you'll want to have an electrical supply to the building.

This isn't all that difficult but in most parts of the United Kingdom ordinary householders are effectively banned from doing any significant electrical work. Anything other than swapping sockets and light fittings needs building regulation approval and the easiest way to get that is to hire a fully qualified electrician who is able to self-certify their work.

First of all think about how you are going to use the space and what your electrical requirements will be. Someone with a detached extension with large windows who uses it to paint pictures during the day may not need much in the way of lighting and may not need any power sockets at all. But someone using the same space for an office will need power for computers and other office equipment, and lighting that allows them to work all year round, round the clock if necessary.

Jot down the results of your thinking and present that to an electrician because the amount of current you might use (and the distance between the extension and the main property) can govern the thickness of the cable between the two. It can also determine the type of termination for the supply at either end of the cable.

Extending A Property's Electrical Supply To A New Building

The approach used for an electrical connection to a detached extension will also depend on the amount you are thinking of spending on your garden extension. If you are able to afford a purpose-built, pre-assembled building then it is likely to come with the sockets and switches for lighting and power pre-installed. In that case you only need to get the electrician to connect the consumer unit inside the extension building to the fuse box in your property.

There may be changes necessary at the fuse box (more likely to be a consumer unit with circuit breakers than fuses these days). It is likely that a residual circuit breaker (RCB), which protects in the case of water getting into the circuits or accidental cutting of the cable, will be added and a miniature circuit breaker (MCB). The MCB cuts off the supply in the case of an overload and acts as a switch to isolate the supply to the detached extension if you need to do some work on the electrics there.

The cable to the new building should be steel wire armoured cable which is buried at least five hundred millimetres deep and clipped to the buildings at either end, where it emerges from the ground. In some areas it is also permissible to attach this cable to a wall that runs between the two buildings, but doing the same thing along wooden fence is unlikely to be allowed, again it depends on the regulations in force in the different areas of the UK.

Doing The Basic Electrical Work Yourself

If you're not having a pre-built extension and you need to add the electrical components to the building yourself, then there's nothing to stop you laying the wiring around the inside of the building and installing the sockets and switches, but all the connections must be made by the electrician. You can also lay the cable that connects the extension to your property.

However, if your electrician disagrees with the way you have laid out the components in the building, the route that you have taken with the armoured cable or the quality of it, then your time and money will have been wasted. So if you decide to go down this route, make sure your electrician is happy with the idea and the materials you have chosen.

Of course, if your electrical supply requirements are not massive, you could consider using solar power for lights and charging batteries for laptops and the like. There's more detail on this approach in a separate article in this section.

Fitting and Plumbing in a Hot Tub

Home Offices in the Garden

Extending Above a Garage

Self-Contained Accommodation in Outbuildings
Share Your Story, Join the Discussion or Seek Advice..
I want to have a separate metre installed for electricity used down the garden ie not to come off metre used for main house.Can this be done and how?
Angel - 8-Jun-17 @ 2:32 PM
Title:
(never shown)
Firstname:
(never shown)
Surname:
(never shown)
Email:
(never shown)
Nickname:
(shown)
Comment:
Validate: