Home > Fitting Out > Energy Provision In an Extension

Energy Provision In an Extension 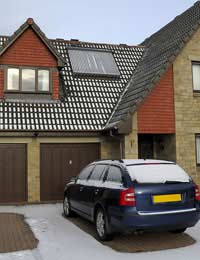 Of course, any extension can simply tap into the existing services in the house such as electricity, and gas if it's available. But an extension is also a chance to think about changing the way you get your energy, if your design and plot will allow it.

Solar panels are available in two mains types and can be incorporated into the roof of your extension, particularly if you have a reasonably sized roof facing south, or mainly south. The two types are photovoltaic (PV) panels, which make electricity from light, and hot water panels, which again use light but heat up water in pipes to boost your central heating and hot water needs.

The way things are at the moment you have to be seriously committed to use these as your only sources of energy though. PV panels are still quite expensive and you are likely to want to do this to make a statement about reducing your pollution footprint rather than for financial reasons, as financial payback will take a long time, if it ever happens.

But if you are thinking this way, then installing alternative energy sources when you're building an extension makes sense as you have the disruption of building anyway, and you can deduct the cost of the roof slates covered by the panels from the total outlay. In fact, there are now a number of suppliers of PV calls in the same physical form as ordinary slate roof tiles, so you could consider using them across the board.

This financial argument is less true of solar hot water panels as they are cheaper to buy, and in fact people often make their own by mounting radiators, painted black, under glass frames. Less efficient than professionally made ones perhaps, but they'll work and are a lot cheaper. The problem is more that throughout the year in the United Kingdom, solar panels are not likely to produce water that is hot enough to power central heating radiators, which are often at about 85-95 degrees Centigrade.

The answer is to switch to a form of heating that doesn't require such high temperatures, such as underfloor heating, which only needs 45-55 degrees. You will need to store the hot water in a well-insulated tank, as the time when you'll need it the most after the sun has gone down and your water is no longer being heated. Or you can boost the heating system with another source, mains gas or electricity, or a multi-fuel boiler if you want to be green.

Another good source of hot water but one that's quite expensive to install, is a ground effect heat pump, which takes the stored heat from just below the surface of the earth and pumps it into the house. But as an extension build is likely to require groundworks, it might not be so expensive overall as you can get the holes for the heat pump pipes dug at the same time as those for the foundations.

Again, the temperature isn't piping hot, but if you can switch the house to underfloor heating you'll only need to heat water for washing, and then only a little as it will already be very warm. If underfloor heating isn't viable then you will need another heat source to boost water to the right temperature for radiators.

Is Wind an Option?

Wind turbines have attracted a lot of attention recently, particularly the micro-turbines that are now being sold in DIY stores. But the reality is that unless you have a steady and regular supply of wind, they are unlikely to deliver an appreciable amount of electricity. With the economics of alternative sources the way they are at the moment, any money being spent on a micro-turbine is probably better spent on photovoltaic cells.