Extending to Provide a Swimming Pool 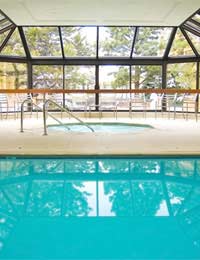 Building an extension to provide a swimming pool is probably one for more well off house holders. But if you really need a pool, perhaps for a disabled relative or a potential champion swimmer in the family, or even just because you fancy one, the costs aren’t that much more than an ordinary extension.

Of course it's likely to be a large extension, or your swimming pool won’t be very big. But the cost of installing the swimming pool itself is offset by the lack of internal work to be done and the simplicity of the build. Unless you go for an 'endless' style pool, it will have to have a large span for the roof and that might put the costs up somewhat.

But to a large extent the cost will vary hugely depending on what you want to build. The simplest option is an exterior pool with an all-weather cover. There are various models on the market, most of them transparent so they keep the heat in the pool as well as warm it with a greenhouse effect. But they don't really qualify as house extensions to most people.

So we're really talking about proper indoor pools here. As well as excavating to form the basis of the pool, the foundations for the surrounding walls will have to be built. Once that's in place the pool can be laid down, the choices being between a pre-formed fibreglass shell, a liner or a tiled finish.

Many contractors will actually build the majority of the surrounding structure before finishing the pool. This avoids it being damaged during the building phase.

Often a conservatory style roof and walls are chosen for a pool. This can be a relatively cheap option but be ready for it to be more expensive than an ordinary conservatory. This is because the width of the span often means a supporting steel sub-structure has to be employed. As the size of the pool gets larger a more traditional build tends to get cheaper than a conservatory style option.

Once you've decided on the building shape and style, consider other things that you might want to add in at the same time. As well as the pool itself, separate changing rooms with showers will mean that people don’t have to traipse through the house and upstairs to get showered and changed.

If you have the space and the money you could install a whirlpool spa and hot tub, or even a sauna. Although these will add to the cost, the proportional extra cost on top of the whole extension project won’t be so great. So it's well worth going the whole hog and installing a few luxury extras while you have the builders in.

At the other end of the scale there are the 'endless' pools that were mentioned at the beginning of the article. These can be installed in a relatively small space and use pumps to create a current that you swim against. You control the speed of the current and adjust it so that you are swimming as fast as you want but staying still relative to the side of the pool.

The smallest of these is about seven foot by twelve foot so they can be fitted in to a relatively small building. This probably isn’t suitable as a family pool but if a proper swimming experience is important then this is the best option for a small space and budget.

Go In With Your Eyes Open

A few words of warning before embarking on a swimming pool extension. The first is that you really need to employ experienced swimming pool contractors to do the job as general builders will not know the subtleties of pool installation.

The other is that swimming pools are considered to give a poor return on the investment in terms of an increase in house value. So be absolutely certain that you want a pool before you start the project.